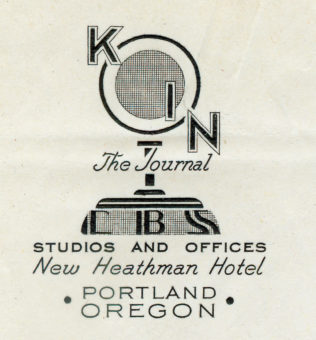 One thing overlooked last year in the commotion around COVID-19 was the centennial of radio in the United States.

Pittsburgh’s KDKA—America’s first commercial AM radio station—went on the air November 2, 1920. That evening, they broadcasted returns in the Harding- Cox presidential election.

Behind each radio or TV transmitting station is a set of letters used to identify it. But why use these letters?

The letters are a legacy from the days of the telegraph. Operators began using short letter sequences as identifiers, using the terms call letters or call signs. Early radio operators continued the practice. Without an agency assigning call letters, operators sometimes picked letters already in use, leading to confusion.

The Bureau of Navigation—part of the Department of Commerce—began assigning three-letter call signs to American ships in the early 1910s.

That was followed by the 1912 London International Radiotelegraphic Convention assigning ranges of letters to each of the participating nations. In the United States, the letters N and A were given to military stations; K and W were assigned for commercial use. Canada got C, and Mexico got X.

With few exceptions, stations east of the Mississippi were assigned the W prefix. Stations to the west got the K prefix.

KEX and KXL-FM in Portland are the only two remaining in Oregon, although the KGW call sign passed on to Portland’s Channel 8 television.

The Federal Radio Commission— precursor to the Federal Communications Commission—began to allow stations to request specific call-letter combinations. That’s when the creativity began.

These days, call signs tend to come in five varieties: locations, numbers, owners, slogans, and words—or letters that can be pronounced as words.

Many stations strive to incorporate a geographical reference into their name. KODL, which pioneered radio in The Dalles in 1940, references “Oregon” and “Dalles.”

Oregon Public Broadcasting’s station comes at it slightly differently. Eleven of OPB’s 16 radio station have call signs that start KO—, followed by two letters indicating the town, such as KOJD for John Day or KOGL for Gleneden Beach.

Oregon Public Broadcasting’s flagship station, KOAC in Corvallis, went on the air in 1923 when the owner was Oregon Agricultural College. OPB references its current name with KOPB-AM in Eugene and KOPB-FM in Portland.

Barney Kenworthy, who put KODL on the air, later added what was then called KWRC in Pendleton, branding it as the “world’s round-up city.” It also stood for his company, Western Radio Corp.

Two stations in The Dalles have call letters that reference individuals.

When former Congressman Greg Walden owned stations in Hood River and The Dalles, he put KMSW-FM on the air. The initials stand for his wife, Mylene S. Walden.

KRHP—the low-power Christian television station licensed to The Dalles— stands for “ring his praises,” as well as its owner, Robert H. Pettitt. 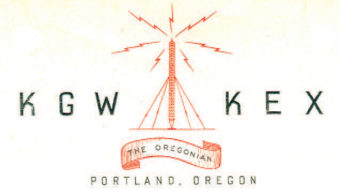 Numbers tend to be related to TV stations, as in Portland’s KATU, which is on Channel 2, and WTWO in Terra Haute, Indiana.

Years ago, The Dalles had a station put on the air by Les Cunningham with the call letters KCIV. At the end of the broadcast day, Les would say, “The letters CIV stand for the Roman numerals for our frequency, 104, and for that ultimate hope of mankind, civilization.”

In the early days of radio, smart newspaper owners decided they wanted a stake in this medium.

By the early 1940s, The Oregonian owned KGW and KEX. The Oregon Journal owned KOIN, which stood for Oregon’s Independent Newspaper; and KALE, another slang term for money. The latter was later changed to KPOJ for the Portland, Oregon, Journal. 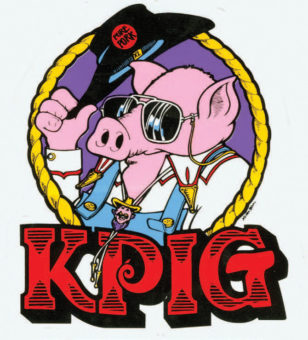 Beyond Oregon’s borders are such stalwarts as WIND in Chicago, KING-FM in Seattle—located in King County—and KICK in Springfield, Missouri.

KINK-FM in Portland originally came on the air with the slogan, “KINK, The Underground Link.”

For years, KISN was “The Mighty 91”—the pioneer rock station in the Rose City at 910 on the AM dial. During the 1960s, the station placed a billboard so drivers headed into Portland from the airport could see this slogan: “Welcome home. We’ve been KISN your wife. She’s 91-derful.”

A pair of cleverly named stations are licensed to Grand Rapids, Michigan: KMFY and KOZY. That’s right, comfy and cozy.

An Oregon favorite is KWAX-FM, at the University of Oregon. What else would one expect from the voice of the Ducks, other than quacks?