Shelter From the Cold

The Warming Place provides respite during the roughest winter weather 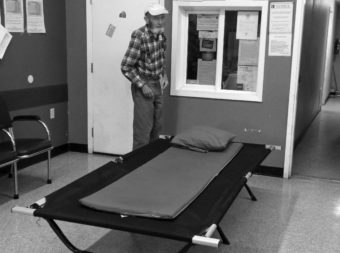 When the weather gets bad, there’s nothing like curling up with a good book next to the fireplace or snuggling up under a warm blanket.

But what if you’re homeless? Bad weather can be miserable if you don’t have a place to get out of it. It can also be dangerous, causing hypothermia if your body temperature falls below 95 F.

Hypothermia can show up as shivering, clumsiness, confusion, tiredness or urinating more than usual, according to Healthline.com. If not treated quickly, hypothermia can cause severe health problems, including death.

Cold weather can also increase the risk of a heart attack. The heart works harder to keep the body warm, leading to increased heart rate and blood pressure.

Fortunately, there are people in The Dalles community looking out for those in need.

The number of homeless people in the area had grown since the 2008 recession. As the recession continued, more people on the edge ran out of resources and needed services.

The Warming Place was born.

“Finding a facility that was open every night that didn’t have events or something was next to impossible,” says Ed Elliott, a group founder who continues to coordinate the program.

The group settled on a former car dealership in which St. Vincent de Paul had set up a place to feed people in need. The Warming Place had a home.

There are a number of advantages to the centrally located building at 315 West Third Street. The site was already a gathering place for meals with a full commercial kitchen.

The group was able to set up as a committee under St. Vincent de Paul, rather than having to establish its own 501(c)(3) charitable group. The nonprofit status allows the organization to receive grants and makes contributions tax deductible.

The shelter is not open every night. That decision is made on a day-to-day basis.

“We start November 15, roughly, to March 15,” Ed says. “We open if the temperature is going to be 30 degrees or colder, including the wind chill. If it’s raining or snowing, then it’s 35 degrees without wind chill.”

Ed emphasizes that these are guidelines, not hard and fast rules.

“In cases where it is too warm temperature-wise for our guidelines, but there’s still snow on the ground and they would have to sleep in slush, we use a little common sense as to what the situation actually is for the night,” he says.

There are other rules, including no smoking, drinking or drugs, and no talking after lights out at 9 p.m.

The doors are locked at 9 p.m. Those who leave the shelter may not return. Guests have to be out by 7 a.m.

No children are allowed. Families that need shelter are provided with a motel room while funds last.

The sleeping space accommodates about 16 adults. Last year, The Warming Place kept 1,044 guests warm and sheltered through the bad weather. 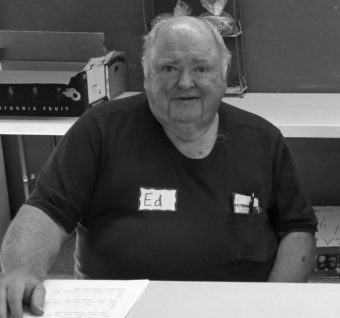 Overnight volunteers are needed. Two 18-and-older volunteers have traditionally been on hand from 7 p.m. to 7 a.m. Even though there is time for the volunteers to doze once guests are settled for the night, recruiting for those 12-hour shifts has sometimes been difficult.

A number of organizations take part in committing to provide volunteers, and St. Paul’s Episcopal Church has begun splitting the over- night into two shifts: 7 p.m. to 1 a.m., and 1 a.m. to 7 a.m. That means doubling the number of volunteers needed each night but also increasing the number of people who feel comfortable volunteering. The change also accommodates more people’s schedules.

All volunteers are given a 45-minute training before starting and are paired with an experienced person for their first few shifts.

“We do training for everyone,” Ed says. “Even if you’re the PR person, you have to go through the training so you understand what goes on and how everything functions.”

In the early days, volunteers had to put away tables used for the community meals in the evenings and set up cots, which are sturdy but not easily assembled. In the morning, they had to reverse the procedure.

Recently, the group received a grant through the Mid-Columbia Community Action Council that allows them to hire paid hosts to set up at night and janitors to take down in the morning. This allows volunteers to come in at 8:30 p.m. instead of 7 p.m.

Volunteers are key to the success of The Warming Place.

As Mahatma Gandhi said, “The true measure of any society can be found in how it treats its most vulnerable members.”

The Warming Place is not the only nonprofit operating out of the St. Vincent de Paul building. Community Meals serves free meals Friday, Saturday and Sunday evenings. Civic organizations, such as The Dalles Lions and Rotary Clubs and members of area churches, take turns preparing and serving the dinners.

The first Community Meal was served April 1, 1983, at the United Methodist Church in The Dalles. The location has changed many times throughout the years but has been at the St. Vincent de Paul Society site for nearly 20 years.

Nonprofit Bread and Blessings serves breakfast onsite Monday through Friday from 9 to 11 a.m. It regularly serves 30 to 40 people. This nonprofit has been active for 27 years in The Dalles and relies solely on donations of food, clothing, money and miscellaneous items.

Another benefit of the site: During business hours Monday through Friday, homeless people may use the shower facilities, wash their clothes, enjoy hot coffee and socialize.

The Warming Place is accepting applications for janitor positions. The pay is above minimum wage and takes just an hour or so from 7 to 8 a.m. For more information, to volunteer or to apply for a janitorial position, call Ed Elliott at 541-386-5857.