The Detailed Price of Power

Calculating the price of power for ratepayers is a complex process involving both science and art.

“It’s the cost of getting the power, bringing it to our territory, distributing it our customers and then serving our customers in terms of our customer interaction—the metering, the billing, the collection—and the processing of that,” Harvey says.

There is an art to each component. For instance, how often should the PUD replace vehicles? As they age and gather mileage, maintenance costs rise. Picking the right timing for replacement can save a great deal of money and effort. Too soon, and too much is spent in capital costs; too late, and too much is spent in maintenance costs and lost use in downtime.

To make smart choices, it’s necessary to have accurate information. That is why each year, workers inspect 10% of the thousands of power poles the utility owns. Poles in Eastern Oregon’s dry climate tend to last 20 to 30 years, although one was found recently that dated from 1926 and was still going strong.

One of the biggest factors in the art side of the equation is the size of a reserve fund. It needs to be large enough to cover contingencies and provide some measure of rate stabilization. Too large, and it means the utility is charging ratepayers more than is necessary; too little, and there won’t be funds available to cover emergencies or potentially smooth out rate increases.

Where and when to upgrade is another decision. Recently, the PUD switched to an automatic metering system that doesn’t require employees to visit each home or business to read meters. The meters communicate wirelessly, beaming their information back to headquarters.

The new meters are more accurate, give instant feedback and eliminate the need for estimating readings, which sometimes had to be done during inclement weather.

The upfront expense will result in long-term savings. The two employees who had read meters are being retrained for other jobs at the PUD.

With this many moving parts— and with costs changing over time— it becomes necessary for the utility to adjust rates from time to time to compensate. The last adjustment was two years ago

The PUD board is committed to smoothing out rate changes to prevent sudden spikes. At their November meeting, board members heard a presentation from EES Consulting, which did a cost-of-service analysis to determine the revenue requirement for the next two years.

The analysis said if the PUD continued the same rate structure next year, along with planned capital construction, the revenue would be two- tenths of a percent short in covering expenses—a deficit that would rise to 13% in 2021.
The board unanimously rejected the idea of waiting until 2021 and boosting rates by 13%. 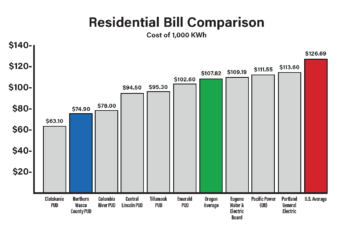 Also under consideration is to reduce planned capital construction for next year by $1 million, which would require a 3.8% increase.

Nothing was decided at the November meeting. No increase will take place before spring. As a ratepayer-owned utility, Northern Wasco County PUD has a policy to never adjust rates during winter—the time of heaviest use.

The board members and employees of Northern Wasco County PUD have the ratepayers’ best interest at heart, and will continue to embrace solutions that provide the best outcome among all