Tucker McCabe took a big leap in his lineman apprenticeship in August—graduating from working with no more than 600 volts up to 7,200 volts.

He reached the “hot apprentice” phase of his training at Northern Wasco County PUD a little faster than he might have had he not been one of the crew members helping Wasco Electric repair damage from the summer wildfires.

“We were working 18 hour days then,” Tucker says. Advancing in lineman apprentice training depends not only on study, but on the number and types of hours the apprentice works.

Tucker came to the PUD in April 2015 as a journeyman tree trimmer. He served his apprenticeship in that field with Asplundh Tree Trimming in the Tri-Cities area. He worked on the tree crew until the PUD decided to hire an outside contractor for those services. It was always his intention to become a lineman.

He started his apprenticeship on January 4, 2017.

“Before that, I had to have 1,000 hours of ground time,” Tucker says. “A groundman gets everything ready for the linemen.”

He was able to take that first step in 2017, because some of his hours as a journeyman tree trimmer counted toward the total.

The first step is still mostly on the ground, working with lines of no more than 600 volts. He works under the supervision of a journeyman lineman. When he graduated to working from the bucket truck, he also had to have a journeyman with him.

“It’s usually 120-240 residential service, setting poles and stuff, with everything de-energized. The second and third steps are pretty much the same, I just got to do more by myself.” Hot apprentice is the fourth step of the process.

“It’s fun. I can work on everything primary [the lines feeding into the transformer],” he says, “but a journeyman is still with me and I’m under his direct supervision.”

Tucker expects his apprenticeship to last three and a half or four years total. In addition to the hours of experience he is getting, his training has involved out-of-town camps and book study.

“In my first year, I went to Camp Rilea in Warrenton for a 10-day training and learned about climbing, electricity and transformers,” he says.

After the training, he started a book study course designed to last 10 months that he completed along with his work in the field. He then returned to Camp Rilea for a second 10-day training all about transformers.

“They have an indoor yard there, and we pretend everything is hot,” Tucker says. He has also completed another 10-month round of book study.

In January, as he enters his third year as an apprentice, Tucker will attend another 5-day training camp.

“Then I will be done with schooling there, but I will still have 20 more months worth of books.”

Right now, Tucker estimates he has completed between 3,400 and 3,500 hours and needs another 2,500 to complete his apprenticeship. That’s about another year and a half, he says, unless some big storms or other emergencies come up to add to the overtime.

His 6,000 apprenticeship hours have to include a specific number of hours on each of 15 different work processes. Some examples include poles and arms (750 hours); switches and cut-outs (300 hours); transformers, capacitors, regulators and other equipment (700 hours). Hot work comes in two stages. The first is 750 hours. The second is 250 hours.

Tucker, 27, says lineman work “just looked like fun.” As someone who grew up in Goldendale and enjoys hunting, fishing and snowmobiling in his off time, a job working outdoors was appealing.

“It’s a lot of fun working with every- body. It’s a great career—a lot of hard work and you’re out in rain and snow.”

Tucker has also joined the on-call rotation for the PUD, serving a week from Wednesday to Wednesday. Calls come in through the PUD’s answering service and, depending on the situation, Tucker usually calls another crew member to respond with him.

In April, Tucker decided to put his apprenticeship skills to the test at the lineman rodeo in Raleigh, North Carolina. “The events were the hurt man rescue, the sidewalk guy, the rope toss over the crossarm and the insulator change-out,” he says. They are judged on points as well as completion time.

“I think about 200 apprentices were there, mostly from the East Coast,” he says. “It was great to meet the other apprentices.” 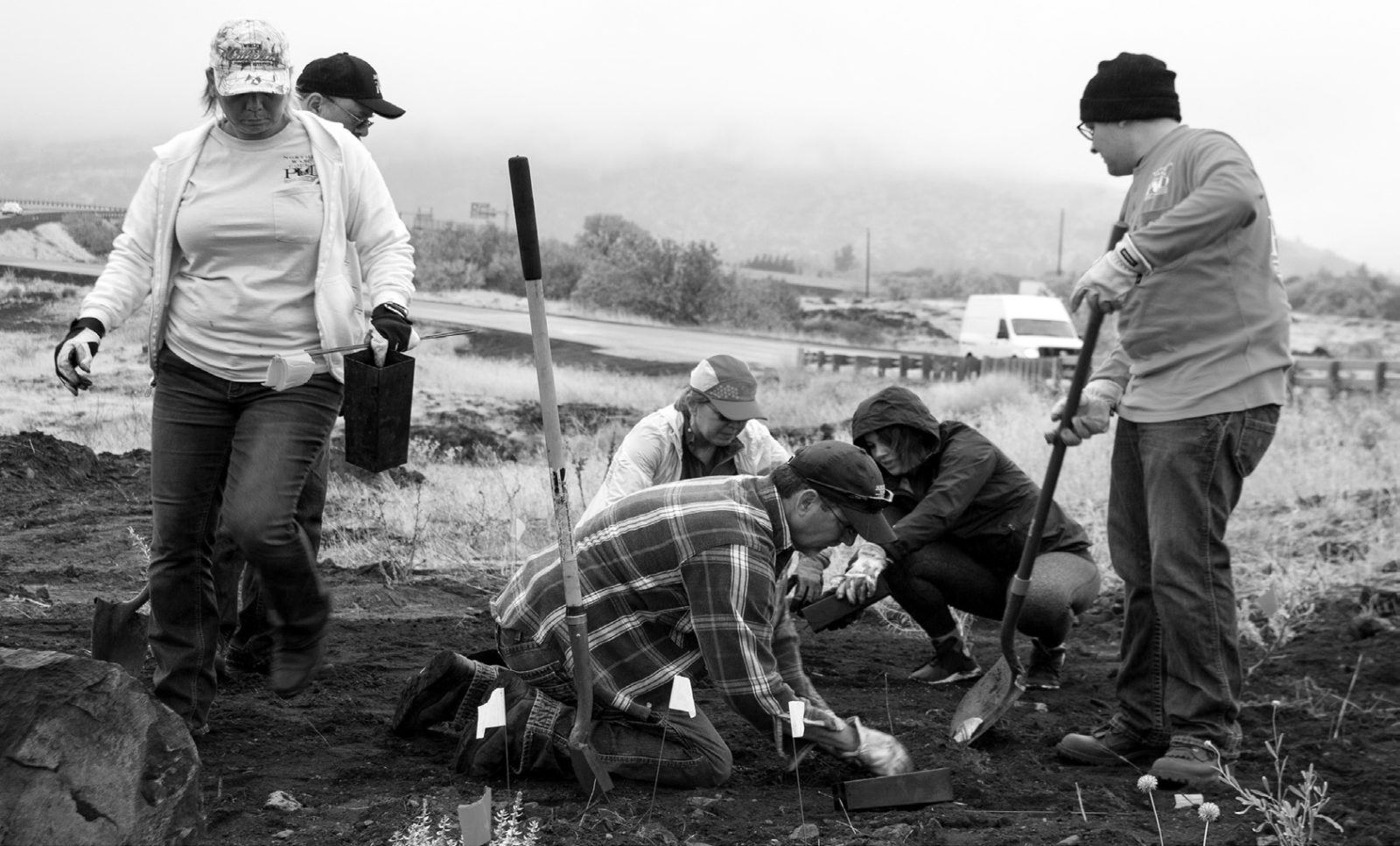 Despite the occasional downpour and steadier mist, Northern Wasco County PUD employees pulled together October 8 to make a difference in their community. A couple of their planned projects had to be postponed—exterior painting and water-sealing don’t really mix with rain— but muddy planting work continued at the PUD’s new trailhead on Rivertrail Way. Rainy weather provided perfect conditions, softening up the ground and helping make it ready for the native plants. Kathy Ursprung photo