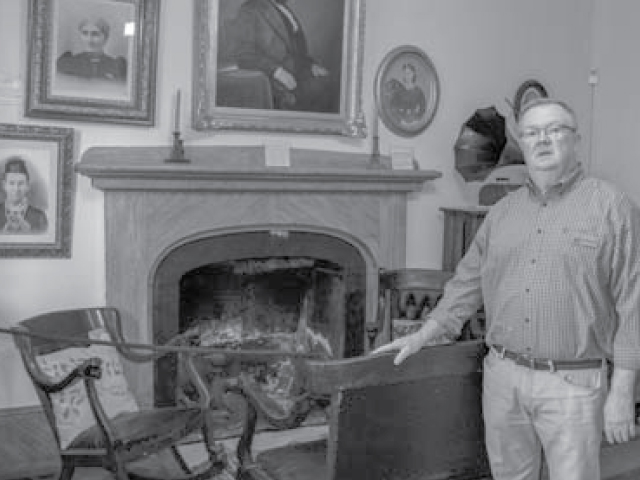 The 1856 Seth Thomas clock on the mantel chimes 2 p.m. as Cal McDermid settles into a sturdy yet comfortable Umatilla House hotel chair to talk about the transformation of Fort Dalles Museum.

The homelike atmosphere is the kitchen of the 1856 Fort Dalles surgeon’s quarters, the last remaining of four houses built in 1856 at the urging of Col. George Wright.

“When he became commanding officer of Fort Dalles, he was very upset at the primitive living arrangements for officers,” says Cal, museum executive director.

Drafty, leaking and miserably uncomfortable, most buildings had dirt floors and no ceilings.

Wright commissioned the new dwellings. Louis Scholl, a young German immigrant and civilian clerk for the fort, designed the buildings based on plans in A.J. Downing’s 1850 “Architecture of Country Houses,” and supervised their construction.

The surgeon’s quarters became a museum in 1905 through the work of a local chapter of the Sorosis Club, a once-nationwide ladies’ club started on the East Coast in the 1860s.

“It was started by women for women who wanted to work outside of the home in an era when, at least for women of a certain level, it couldn’t have been considered quite respectable,” Cal says. “These ladies were the ones who decided there was history worth saving at Fort Dalles.”

The women partnered with the newly formed Oregon Historical Society to raise money to refurbish the building.

From 1905 until recently, Fort Dalles Museum served as a “museum of things,” where visitors could come and see the artifacts of days gone by in Wasco County.

“It has been close to three years since we made the decision to take the museum into a position of telling stories,” Cal says.

This is the first year the museum has stayed open for the winter. The idea is to give families an indoor option for the gray days of winter.

The collections in each room have been edited and organized to tell specific stories. The kitchen tells the story of how Fort Dalles came to be built. It features a painting of Wright and a drawing of the fort’s original layout across 10 square miles.

Under the lid of a small school desk in the adjacent butler’s pantry are materials for children who want to start a scavenger hunt of the museum.

Mounted in the same corner is a display cupboard that was part of the 1905 Lewis & Clark Exposition. The cupboard once contained school work from all of the schools in Wasco County at the time, including Hood River County schools.

“It’s filled with copies of the originals,” Cal says.

Visitors are encouraged to open the case, photograph the items and touch almost anything in the children’s corner.

The former dining room contains displays related to The Dalles’ early days as a river port city. Those days were nearly forgotten after freeway construction cut off downtown access to the river. The opening of the Union Street underpass in 2001 and subsequent dock construction restored that link.

The same room features a collection of Indian artifacts, many of which were unearthed as a result of excavation done before The Dalles Dam flooded the area. The display features a video of fishing at the raging Celilo Falls, which were covered in 1957 beneath the dam’s backwaters.

The front entry way offers a nod to The Dalles’ more notorious history. A display tells the story of the old Horn Saloon, where the owner paid in drinks for the horns and dead animals used as decor. The exhibit features old gambling machines from the saloon’s era.

The parlor features 1890s-era decor, including an old phonograph that plays recording cylinders. Much of the furniture in the room was donated by local families.

“There’s a lot of early family memorabilia there,” Cal says. “We’re building on an idea of trying to get the current generations of these families to come up and take photos with their belongings.”

Upstairs exhibits include the Umatilla House, a woman’s bedroom display, and a Western collection featuring a bearskin coat worn by a coach driver that ran the route between The Dalles and Sherar’s Falls.

The most recent exhibit addition was made in the barn of the Anderson Homestead, a 1901 Swedish-style farmhouse relocated from Pleasant Ridge outside The Dalles. The barn features an exhibit about the Pleasant Ridge Schoolhouse, including textbooks and slates.

“At the Anderson Homestead house, our big project this winter is to freshen up the photographs, redo the text panels and in general go through the house and get a bit more organized and more viewer-friendly,” Cal says.

A long-term project that had slowed in recent years is a car barn to protect the museum’s historic vehicle collection, which is housed in an open shed. That plan recently gained new momentum as a result of interest from several antique car owners.

“We’re getting ready to go again and make a major capital drive to build the new building,” Cal says.

“We have had a wonderful, steady group of people over the years through thick and thin who have supported the museum,” Cal says, but the museum is hoping to bring new interest.

Preservation work is also a priority. One big addition was installation of air conditioning to provide better climate control for the museum’s contents. Also planned this year is continued work on the building, followed by landscaping.