Two Cents’ Worth — on Two-Cent Pieces 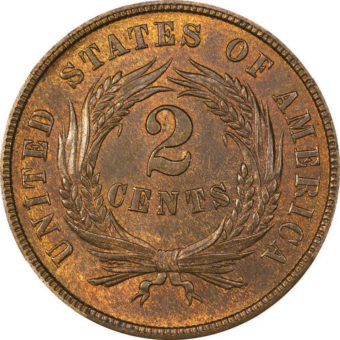 Many people think what Americans consider standard U.S. coinage—the penny, nickel, dime, quarter, half-dollar, and dollar—are all Americans have ever used. That is far from the case.

America is a young country. When it declared itself independent from England, it rejected everything, including the British monetary system of 240 pence-to-the-pound sterling.

The new nation was short on several immediate resources, and one of them was circulating coinage.

The first coin produced by the country came in 1787—two years before the Constitution was ratified—so it was a product of the Congress of the Confederation of the United States.

The first coin was called the Fugio cent. One side of the coin showed a sundial, with the word “Fugio,” indicating that time flies and implying it should not be wasted. Below that was the phrase “Mind
Your Business.” That was intended more to remind people to take care of their business, rather than to keep out of the business of others.

The coins were popular, but the new government did not have the financial wherewithal to produce them in great quantities.

In fact, until 1857, the Spanish 8-reales silver coin was official legal tender in America. The Spanish first started minting these “pieces of eight” in Mexico City in 1538. Because it was widely used in Europe, the Americas, and the Far East, it became the first world currency by the late 18th century. It was also the coin upon which the original U.S. dollar was based. With limited quantities of smaller denominations available, users of the 8-reales coin had a direct method of making change. They would take a chisel and chop the coin into smaller pieces. A wedge of coin equal to a quarter of the diameter would be worth 2 reales, or “two bits.”

Born just a few decades before the turn of the 19th century, the new nation spent some time in the 1800s fiddling with denominations in the monetary system. It was of great concern to the new government. The first building built by the fledgling nation was a mint in Philadelphia, which was then the capital of the U.S.

Before the century was over, the mint experimented with—and ultimately abandoned – these fractional denominations: half-cent, half disme (pronounced “deem,” it was equivalent to half a dime), 2-cent pieces, 3-cent pieces in both silver and nickel composition, and 20-cent pieces.

Although the denomination had been suggested as early as 1806, the first 2-cent pieces were minted in 1864 and were the product of the Civil War. Many Northerners feared that if the war went poorly, paper money and government bonds might become worthless, so they hoarded federal coinage. It vanished from circulation in much of the United States in 1861 and 1862.

Private enterprise stepped in with private token issues, sometimes in copper-nickel approximating the size of the cent, but often thinner pieces in bronze. This fact did not escape government officials.

In 1863, Mint Director James Pollock noted the private cent tokens sometimes contained as little as a fifth of a cent in metal, yet still circulated freely.

The cent at that time was struck of a copper-nickel alloy, the same diameter as the later Lincoln cent, but somewhat thicker. The piece was difficult for the Philadelphia Mint to strike, so mint officials recommended the coin’s replacement.

Congress passed the Coinage Act of 1864 authorizing cents and 2-cent pieces of “French bronze”—a mixture of 95% copper and 5% tin and zinc. Some 20 million of the 2-cent pieces were minted in that year and circulated well, until the shield nickel was introduced in 1866. It was recognized as a handier denomination.

The 2-cent pieces were produced in decreasing quantities until 1872. A few were minted for collectors in 1873.

The tumult of the Civil War also introduced a new motto for the coin. As early as 1861, the Rev. Mark R. Watkinson of Ridleyville, Pennsylvania, had written to the secretary of the treasury, Salmon P. Chase, proposing some reference to God be placed on the coinage in wartime.

Several patterns were produced, with varying iterations of the theme. They included “God Our Trust,” “God And Our Country” and the ultimate winner, “In God We Trust,” which appeared on a banner above a stylized shield on the obverse, or “heads” side of the coin. The motto was added to other coins two years later, although it was not added to U.S. bills until 1957.

Although the short nine-year life of the 2-cent piece was a century and a half ago, collectors today can find a reasonable example for less than $20. Some of the rarer dates in higher condition can reach into the thousands—not a bad return on a two-cent investment.